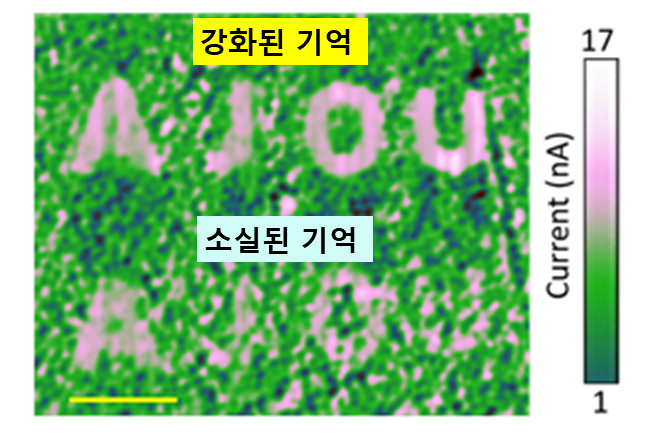 Professor Seo Hyung-tak’s team has succeeded in developing a nerve-emulating artificial synapse, raising expectations for the creation of a high-density artificial synaptic platform that emulates the synapse, the fundamental structure for nerve signal transmission in organisms.

The synapse, which forms the basic unit of the brain, connects neurons to enable the transmission of signals between them. Nerve cells are able to communicate because synapses exchange neurotransmitters. In recent years, research on the development of artificial synapses using various new materials has been growing.

The von Neumann architecture, which has been frequently used in research of this kind, has been found wanting in terms of energy efficiency and speed. The architecture transmits information from the memory to the central processing unit (CPU) for sequential information processing. As a result, the memory becomes prone to bottlenecks, slowing down the processing speed, increasing energy demand, and complicating the differentiated retrieval of information reflecting different intensities of spatiotemporal information.

Unsurprisingly, there has been much demand for a nanosized artificial neural network capable, like synapses, of processing information with little electricity, controlling short- and long-term memory in response to the strength and duration of the given stimuli, and integrating memories in high density. Developing such a device, of course, requires an accurate understanding of how individual synapses function.

Professor Seo’s team attempted to develop an artificial neural network using a heterogeneous-structured artificial synapse that combines nickel oxide (NiO) and zinc oxide (ZnO). The conjoined surface of these compounds controls the chemical effects of the materials and emulates the ion-based neurotransmission of actual nerves. Using this mechanism, the team successfully created a deliberate surfactant defect to serve as a receptor of electrons, allowing them to store and control, in the defect, electrons moved by external stimuli to emulate the short- and long-term memory of human synapses.

Professor Seo explained, “While our method is similar to how non-volatile flash memory devices, widely used today, store information, our product is distinct in that it can control the stored information in response to the intensity or duration of input signals.” He went on to add, “This technology allows us to emulate all the typical properties of actual synapses and neural networks.”

Furthermore, by making effective use of the homogenous resistant switching movements of their artificial synapse, the team has proven that the size of an artificial synapse can be reduced to 40 nanometers (1 nanometer = 1x10-9 meters) with the help of conductive atomic force microscopy (CAFM). This size is similar to that of an actual synapse.

The team has also confirmed that their artificial synapse is capable of not only functioning stably, but also supporting the parallel connection of innumerable artificial synapses to enable multi-stage signal processing and real-time learning rules (Bienenstock, Cooper, and Munro rules), which are crucial to artificial intelligence, at the nanoscale.

Professor Seo said, “A human brain is a bundle of nearly 100 trillion synapses connected in a parallel circuit. To develop an AI system with artificial synapses, each individual synapse must be capable of emulating the human brain’s mechanism for learning and processing multi-stage signals.”

He also remarked, “Our latest finding successfully identifies how artificial synapses, using nanoscale oxides, can emulate the functioning of actual synapses. We expect that this discovery will contribute to the development of a high-density AI platform.”

The team’s research was conducted with support from the Future New Material and Original Technology Development Program and the Basic Research Support Program for Experienced Researchers, provided by the Ministry of Science and ICT (MSIT) and National Research Foundation of Korea.